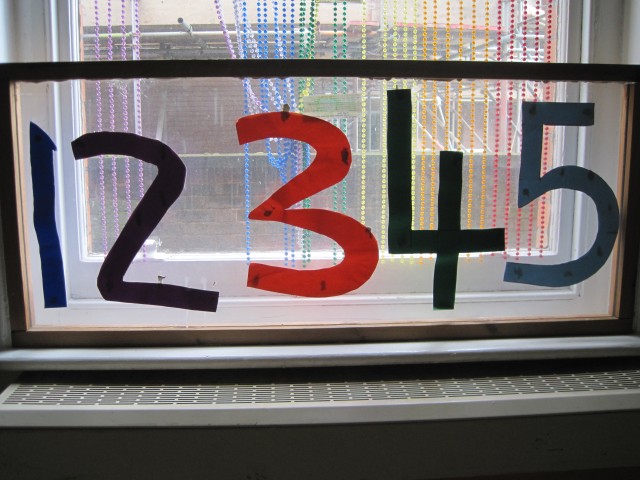 Eve and Leah had their final day at nursery today. An occasion marked by cakes, flowers and presents for the staff and a hundred memories of the last two years and ten months. After tearful hugs we left for the last time, running for the bus as the rain pelted our last bagful of  paintings, collages and practice writing. We celebrated with fish and chips and fizzy apple juice. Mr Rush Hour and I toasted the end of the era with uncharacteristic large glasses of 6pm wine.

Celebrating feels both right and wrong. Right because I’m so proud of all of us for making co-parenting, working full time, raising happy children and staying happily married somehow work, and by ‘us’ I wholeheartedly include the staff in the nursery. It’s been a privilege to be able to bring Eve and Leah onto campus each day and leave them in a wonderful nursery where they’ve learned so much and been so well cared for. It’s been worth every difficult commute, even this one and this one. Even though Mr Rush Hour’s job is a tube ride away he’s done 50% of the drop offs and pick ups and he’s more often than not been the one to do the emergency pick up when one of the girls has thrown up or I’ve had to work late and he’s never once complained. We said a fizzy apple juice toast to Eve and Leah this evening because they have been amazing, always happy to go to nursery and enthusiastic every single day about getting on the bus. Eve is so excited about and so ready for school and we know she’s outgrown nursery.

Yet mixed in with the celebrations is sadness at saying goodbye to the staff who we’ve relied on for so much, gloominess because the nursery won’t be there next term as budget cuts have forced its closure and worry about how Leah, who doesn’t seem as ready for school as her sister, will fare. Sometimes the nursery years have felt like they were passing in Thomas time but tonight I’m so wistful for those toddler times, anxious that now the years will speed up and primary school will go by in a lickety split.

This entry was posted in celebrations, childcare, community, parenting, transport. Bookmark the permalink.

2 Responses to No more nursery