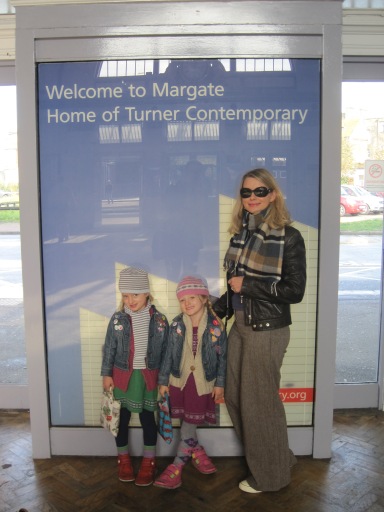 It’s half term and I’m mostly working. Mr Rush Hour has taken the week off, so he’s the one who gets to go to the halloween party (although I was the one who got to stay up late making the costumes…..) and who gets the lie-in’s until 7am (wey hey). Wednesday is my day off and who says you can’t fit a seaside mini-break into one day?  Not me, which is why we were all on the early train to Margate. Before lunch we were on the beach admiring those endless Turner skies.

Next stop the Turner Contemporary. Featuring The Kiss 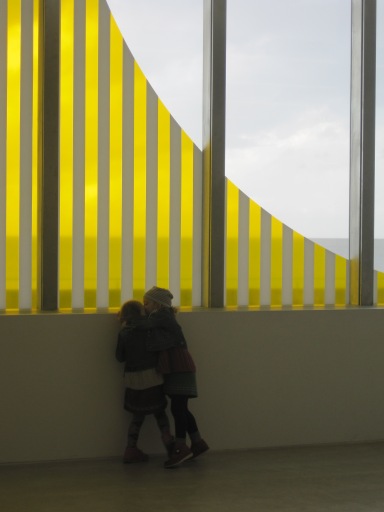 No, not that one

or even that one 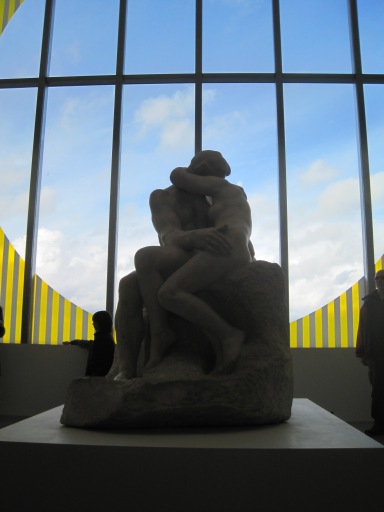 This one of course, and it was certainly attracting the crowds. Margate was bustling and the new gallery was packed out and yet, and I feel mean writing this, it was such a disappointment. The building looks insubstantially shed-like and the gallery space is just so small. For some reason all of the seafront space, with the views of the sea and magnificent Thanet skies is allocated to private meeting space and the exhibitions have three windowless rooms. Such a shame because it could have rivalled Tate St Ives for sea views or the Wakefield Hepworth for architecture. Perhaps things will improve in the new year when the Turner exhibition opens which must surely use the light-filled sea view space.

There was a quite good exhibition exploring 20th century attitudes to adolescence. A film of Japanese teenagers doing karaoke was just enough to keep Eve and Leah occupied although it couldn’t compete with hiding in the lockers.

Outside the gallery there is a very charming, crumbling Georgian town centre with new chi chi shops. The signs are that Margate will soon be as trendy as nearby Whitstable. We’ll definitely be visiting again to see the Turners and to make the most of the lovely sandy beach.

This entry was posted in beach, galleries & museums, water. Bookmark the permalink.