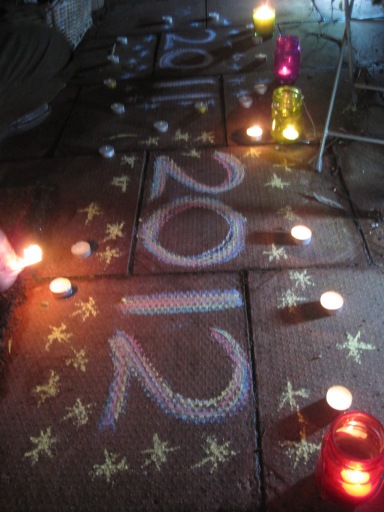 Rather unexpectedly for two exhausted parents, the previous three New Years have seen us out at parties, twice taking Eve and Leah plus travel cots with us and last year paying a king’s ransom for a sitter. This year, just back from a trip up North, we wanted to stay at home, but how to celebrate in style and involve Eve and Leah?

The festivities began outside with a pot of chalks and a lot of tea lights. Toasting with prosecco and apple juice we said goodbye to 2011 and welcomed 2012. Eve asked plaintively where the actual toast was but otherwise entered into the spirit.

Next up a feast of homemade sushi (following the instructions in Economy Gastronomy, fun and easy to make) and Nigella’s chestnut chocolate pots, and then some lists. We posed questions which included best meal (mine was this cake), happiest moment (we both said watching Eve and Leah in Aladdin), worst time, best phrase (cowboy up cupcake from The Legend of Colton H Bryant was mine), best film/book/exhibition/music (Nowhere Boy/The Good Earth/Gerhard Richter & Leonardo/Adele 21), most creative endeavour, proudest parent moment, most romantic moment (we managed to come up with three between us, not bad), biggest regret and best hope for 2012. It was a really lovely evening and Eve and Leah entered into the spirit of the lists (cheesy pitta breads, Frog in Love, Mary Poppins, drawing Mummy’s earrings, being bridesmaids and having our ears cleaned all featured, that last one being their unanimous worst moment).  Leah said that her best moments were “when we are all together” the simple and absolute truth of which led to many more apple juice toasts.

This entry was posted in celebrations. Bookmark the permalink.