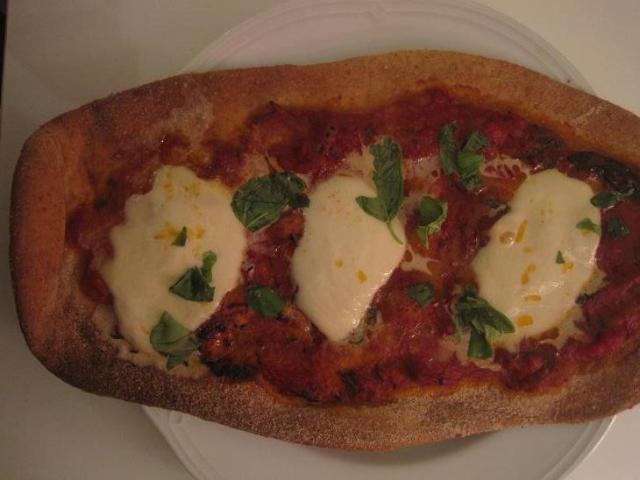 Variations
Wilted spinach (crack an egg on top of the pizza and bake for the final ten minutes for a fiorentina)
Mushrooms and leeks (cook in a pan with some white wine, oil and fresh herbs)
Roasted peppers, courgettes, aubergine (goats cheese works well with aubergine instead of mozzarella)

1. Around lunchtime start the tomato sauce. Heat the oil in a large, sturdy pan and add the chopped garlic and the grated veg. Add the chilli, teaspoon of sugar (lavender sugar works well if you have any) and basil leaves. When softened add the tomatoes and season. Turn the heat down as low as it will go. After several hours it will have reduced by half and become very thick. Turn it off. It actually makes far more than you need for four pizzas but it’s good as a pasta sauce or for any recipe which calls for tomatoes, or you can freeze it.

2. Once you’ve started the sauce, next make the dough. Dissolve the sugar in the water and sprinkle the dried yeast on top. Eve and Leah like to watch the yeast bubbles rise, declaring it like a monster. When it has a head like a vigorously pulled pint of Guinness it’s ready.

3. Roughly mix the flour, salt, olive oil and, if using, the dried herbs. Pour the yeast mixture on top and mix.

4. Knead as lightly or as vigorously as you and your helpers are inclined to do. I find kneading lightly to the count of 100 is about enough. David and the girls like to throw the dough in the air

5. Cover with Clingfilm or a slightly damp tea towel and leave somewhere warm. Under the radiator in our kitchen is the perfect spot. Leave for an hour and a half or so, knead again and return to the bowl for another hour. If you are in a hurry you can cook with the dough after about 45 minutes of rising time.

6. Cook your additional toppings if using

7. Divide the dough into four – we do two large and two small. Roll out on a floured board and put on either two or four metal baking dishes, which you have lightly oiled. Turn the oven to 200 degrees centigrade. The oven needs to be hot when the pizzas go in

8. Dust the pizzas with polenta flour (this stops the toppings making the dough soggy).

9. Add the tomato sauce to the top, as much or as little as you prefer

10. Bake the pizzas for about 15 minutes, take out of the oven and add any toppings and the cheese

11. Return to the oven for about another ten minutes or so

12. Slice with a pizza wheel if you have one or otherwise gently coax onto a plate

13. Serve with a good film and a large glass of red wine